Last week we kicked off a new series exploring the Kairos philosophy of education.  As we go through the next few weeks, we will explain why “competency-based education” may not be the best phrase to describe what Kairos is doing.  To get started, we will take a deeper look at outcome-based and competency-based education and why they begin with the end in mind and how that differs from the approach often taken in modern higher education.

The Gravitational Pull of Reductionism
There are very good things about outcome-based and competency-based education.  Beginning with the end in mind is usually a good way to begin a process (Luke 14:28-30).  In our experience, the challenge is that modern higher education has an extremely strong gravitational pull toward reductionism.  We tend to think that if a larger process is broken down into its component parts then, when we put all of those parts back together, we will have the whole.  This line of thought happens with everything from software design to biblical study to educational program design.  The problem, however, is that it never actually works that way.  By separating something into its component parts, we lose something very important.  The things we lose vary based on the topic at hand but, in general, we lose the fact that the work of integration actually changes each and every component in some way.  Let’s take a look at how that works in education.

The Pyramid of Courses
For most of the history of modern higher education, we have built programs using what I call a pyramid of courses.  We line up a series of courses, one building on the other (or so it seems), and then invite learners to progress through those courses in a very particular order.  Provided the student passes a course, which usually means they didn’t fail it, the student moves along until each course has been completed.  At which point the student is awarded a degree.  It looks something like this. 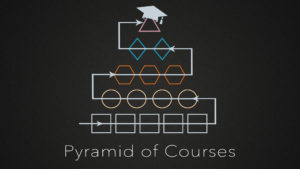 Over the years, we have worked hard to make this pyramid as flexible as possible.  We used things like advanced standing, electives, and field education to allow students to slightly adapt their journey.  I call this the flexible pyramid. 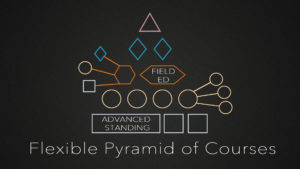 Unfortunately, the pyramid of courses approach structured education around the idea that a degree could be divided into its component parts (courses) and when put together they would create a fully orbed educational experience.  We would attempt to integrate thinking and processes by creating courses like “Integrative Seminar” or “Integrating Theology and Practice.” While these are good efforts, the need for them seems to confirm that the process itself is not inherently integrative.  As a result, the educational journey tends to result in an equation that looks something like this: Complete Course A + Complete Course B + Complete Course C = Earn Degree. 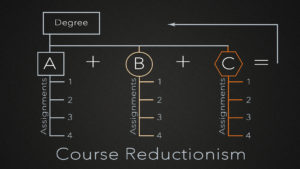 Obviously, this is a truncated explanation of the process, and I am sure there are pieces that could be nuanced in ways I have not and probably could not.  My point, however, is to share the educational paradigm that led to outcome-based education (OBE) and eventually competency-based education (CBE).  As educators were looking at this pyramid of courses and the reductionistic equation they were using for program design, they began to call attention to the fact that these processes were not producing consistent results.  In short, the assembly line approach which worked so well in factories did not work well in human development.  That is when they began to focus on outcomes and to kind of reverse engineer programs – they began with the end in mind.

CBE took this one step farther by inviting new voices to contribute to the program design process.  Educators worked with employers, faculty, governments, and more to identify competencies that are needed.  Then they began to build programs in light of those competencies, again beginning with the end in mind.  The challenge, however, is that the underlying philosophy hadn’t changed.  We were still working with a potentially flawed understanding of human development.  We still assumed that humans develop in some sort of linear fashion.  As a result, what was a pyramid of courses has become, in my opinion, a pyramid of competencies.  While we may have developed better educational journeys and more practical ways for students to demonstrate learning (both of which are very good), we were still asking students to progress through a standardized curriculum that had been built using component parts.  Thus, CBE uses the same pyramid and the same equation. 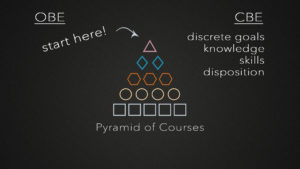 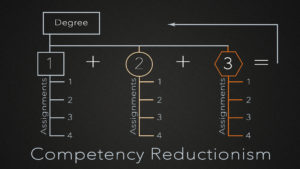 Join us next week as we introduce the concept of competency-based theological education.